Sensei Ross Conklin has been studying martial arts for over 25 years. He is the owner and head instructor of Senshi Dojo in Easley, SC and has been instructing children and adults karate in upstate SC for over ten years. Sensei currently holds a third degree black belt in Isshinryu Karate. He is a member in good standing  of United Southern Isshinryu Karate as well as the International Isshinryu Karate Federation and operates the only IIKF charter dojo in SC. Sensei Devotes his training to the study of traditional Okinawan martial arts and how they are used to better the body physically and mentally. Sensei Ross has competed in both sport karate and kickboxing in the past. He currently strives to bring true Karate to his students with an emphasis on self defense and self discipline.

​​​
Monique is a graduate of Bob Jones University 1994 with a Bachelors of Science in Biology, and a Bachelors of Science in Nursing, with minors in music and bible. She Currently works as Charge Nurse at Cannon Memorial Hospital in the ED, and moonlights at Hillcrest ED. She has held multiple volunteer positions teaching children music and bible over the last 20 years.  Monique has studied several styles of martial arts including: GoJu Ryu (77-80), and Tae kwon do (81 – 91). Took 23 years off of martial arts to raise a family and build career. She started with Senshi Dojo in Dec. 2014, attaining Shodan in Oct. 2018. Member of IIKF and USIK.

" It is never to late to start. You can do hard things! You don’t have to be great to start, but you have to start to be great." -Ms. Mo 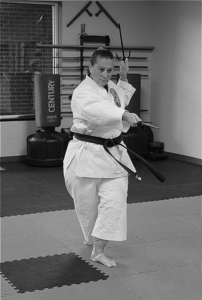 Dr. Jonathan Holloway is an assistant instructor and Sempai (senior student) at Senshi Dojo. Dr. Holloway operates Holloway Family Chiropractic in Easley, SC near the dojo, and is an adjunct instructor at Greenville Technical College where he teaches Anatomy and Physiology. He is a graduate of Tri-County Technical College (‘03), Clemson University (’06), and Sherman College of Straight Chiropractic (’11) where he was recognized with the Service Distinction award. He has trained in a combination of Isshin Ryu karate (Sho-Dan ’16), Shotokan Karate, wrestling, and armored medieval combat for 17 years. Jonathan won the 2014 International Tournament of Chivalry Longsword competition, the 2015 Dragon’s Cup and Dragon Cup Pro-fight, and numerous other weapons based tournaments. He credits his foundation in Isshinryu karate for providing the disciple to complete his doctorate degree and the skill to compete with full contact fighters from around the world. Dr. Holloway is a member in good standing with USIK as well as IIKF. 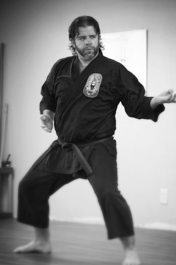 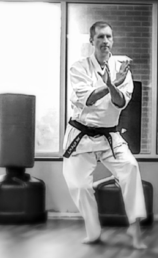 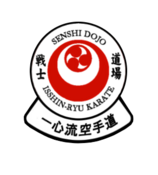